As part of its Lync family -- the new and improved name for Office Communications Server starting with the 2010 release -- is getting a new Mac client.

On the Microsoft Mactopia blog on September 24, officials explained the new strategy.

Windows Live users will continue to use the dedicated Messenger for Mac client, according to the post. But Lync Server 2010 users will start using a new Communicator for Mac client. The Messenger for Mac 8 beta launched in March and added support for video calls with other Windows Live users. The Communicator client includes built-in Live Meeting functionality, Microsoft officials said earlier this year.

The explained the reason for adding a new Communicator client this way:

'One focus of Office for Mac 2011 was to integrate real-time communication features into Office applications like Word and PowerPoint and we expect that effort to continue.

'In addition to integration with Office, we need to support our two partners, Windows Live and Office Communications Server (aka Lync). Within Microsoft these are separate organizations that move quickly to add new, useful features for their respective users.

'In order to best support productivity with Office applications and the features of both partners, it was time for us to separate the applications. Separate apps will allow us to provide the best experience for both sets of users.' 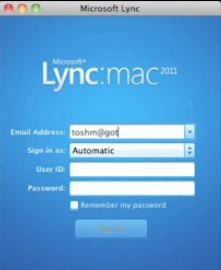 Update (September 27): Microsoft officials say there still will be a Silverlight Web client for Lync. They also are declining to say when testers will get the Mac Communicator client for Lync.

Recently we released the new Lync client for the Macintosh platform and customers have asked if it will work for Lync Online and Office 365? Yes, but we will need to make two minor updates: